MEDICAL HELP FOR THE UKRAINIAN ARMY

Due to recent events in Ukraine it has been highlighted that the Ukrainian army require big support in providing medical supplies and equipment for the troops fighting on the front line. Unfortunately our army as well as our doctors are short of everything, because the government funding has been very minimal for quite some time.

Members of the Ukrainian Medical Association in UK are actively working with the network of Ukrainian army volunteers and Director of Humanitarian Initiatives, Ulana Suprun of the World Congress of Ukrainians in Kiev and trying to facilitate the ongoing demand in medical supplies and equipment.

Up to 90% of all combat deaths occur before casualty can reach Medical Treatment Facility. The life of the injured ones lies in the hands of the one who provides the first medical care to the casualty. The three most common causes of death on the battlefield are: haemorrhage from extremely bleeding wounds, tension pneumothorax and airway problems.

That's why UMAUK concentrates all the efforts to buy only most important things:

Combat Application Tourniquet (CAT) which is the single most important thing to have to stop catastrophic bleeds.

Celox bandages. NOT CELOX GRANULES The granules are very dangerous to use on the battlefield. They blow around in the wind, get into eyes and blind the soldiers, or get down the soldier's throats and burn their trachea so they can't breathe. The granules don't dissolve, and surgeons have a very hard time picking out the granules from the wound during surgery, that prolongs the surgery and increase the chances for complications. And if granules are poured into an abdominal wound, they can cause peritonitis (infection and inflammation of the intestines) or damage the intestines by burning them (Celox produces a lot of heat when it works).

Easy IntraOsseous access kits. It proved to be difficult sometimes for the most experienced of doctors to get IV access in collapsed patients. Easy IO is a quick and safe alternative, when resuscitation is crucial. It is not enough just to plug the whole - you need to replenish the volume of lost blood in order to buy time and get the patient to the hospital.

UMAUK is gathering money from the organisations and individuals to buy the more relevant medical supplies and equipment for the army needs in bulk because it is much cheaper to the small quantities.

We buy big bulks from trusted suppliers therefor we can get 50% discount on all our purchases.

We need to act fast as Ukrainian soldiers dying every day from the lack of medical help!

Even £5 can save someone's life. 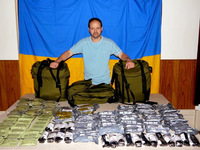 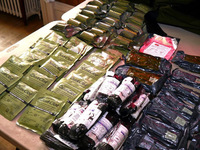